On May 20, UEF and the Vietnam Records Association - Vietnam Record Institute (VIETMASTER) signed an agreement on coordination in organizing the qualifying round of the "English Olympics of Vietnam" (EOV). The signing ceremony has opened up a long-term cooperation relationship between UEF and VIETMASTER and brought the EOV competition closer to UEF students. 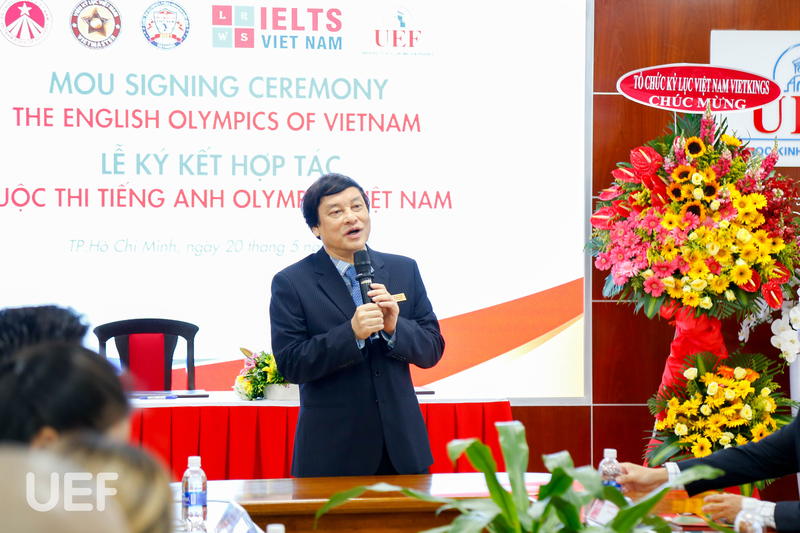 Mr. Do Quoc Anh speaks at the signing ceremony with VIETMASTER
At the beginning of the program, UEF representative, Mr. Do Quoc Anh shared: “UEF is very honored to welcome the members of the Vietnam Record Association. We know that the EOV contest has existed since 2019. Up to now, this contest in the world has attracted about 250,000 students in 300 participating academic institutions. With the goal of striving to become a typical international university, UEF always tries to educate students with English. On that basis, we are honored to be on the Organizing Committee of the competition. The signing with Vietnamese Recorders Association helps the study encouragement to develop further. Not only in the competition, UEF wishes to cooperate with the Vietnam Record Association for a long time in many aspects”.

Dr. Duong Duy Lam Vien talks about the useful playground EOV
Representative of VIETMASTER, Dr. Duong Duy Lam Vien informed about the contest: “The Vietnam Record Association has a mission to bring the quintessence of Vietnam to the world and bring the quintessence of the world to Vietnam. We want young people to realize their dream of reaching out to the big sea, becoming global citizens in the 4.0 era. In 2019, the Vietnam Records Institute in collaboration with the Vietnam IELTS Center organized the first season of the successful EOV competition, finding many English record holders. This is an interesting and useful playground for students. Following the success of the first season, we decided to hold the EOV season 2.”

EOV is known as a non-profit project, an attractive and highly academic English contest. The contest is also a bridge to inflame the fire of passion, to light up the dream of mastering foreign languages, to help the young generation build confidence and initiative in learning and using English, developing eloquent thinking and exploring. Breaking new knowledge in the trend of global integration.
After the remarks of representatives from both sides, Dr. Do Huu Nguyen Loc and Dr. Duong Duy Lam Vien signed the agreement in the presence of leaders, lectures and experts presenting at the ceremony. 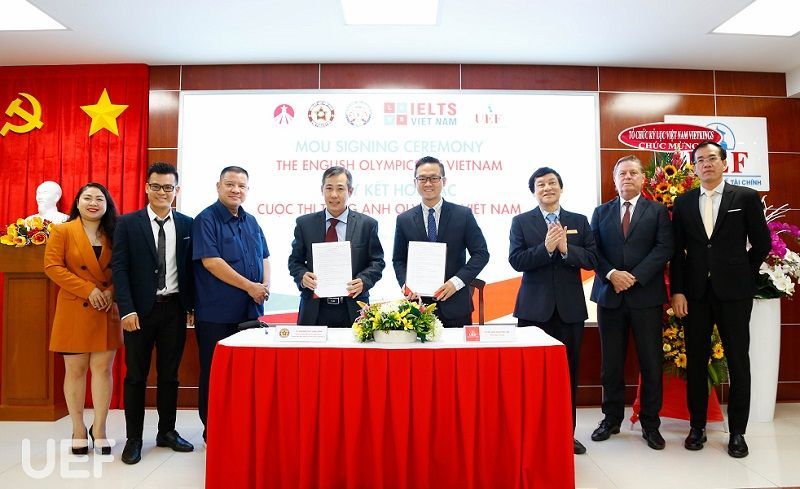 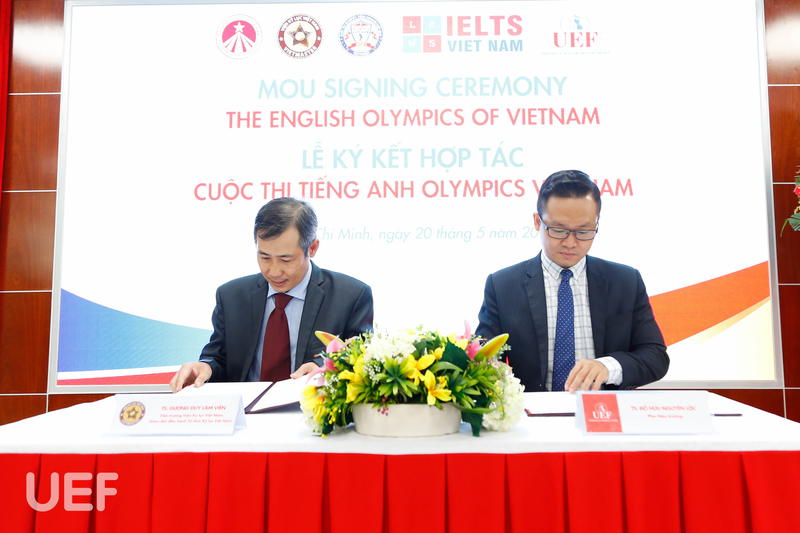 Representatives of UEF and VIETMASTER signs the agreement
Soon after, UEF and VIETMASTER discussed in detail about the coordination in organizing the qualifying round of the EOV competition. Accordingly, the qualifying round will have 2 parts: online and offline with at least 100-300 participants. In the online section, candidates will submit a video to the contest according to the topic of the Organizing Committee and will choose 50 to 70 candidates to enter the offline exam.
In the offline contest, candidates will debate in English by topics. The judges will select the 10 best contestants to enter the national semi-finals. Qualifiers will be held at UEF scheduled for September 2021. 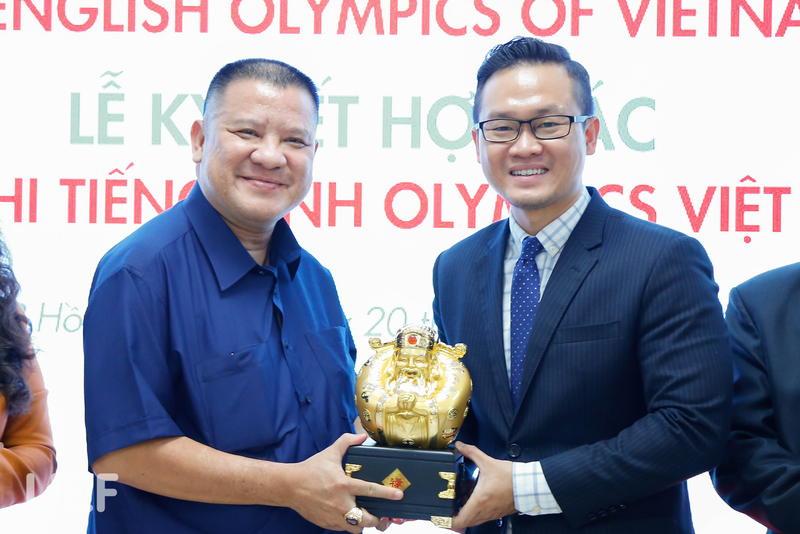 The representatives of the two sides discuss in detail about the cooperation in organizing the offline qualifying of the contest
The signing ceremony between UEF and VIETMASTER took place successfully. This partnership promises to bring many new educational support programs and activities in the coming time.
News: Nguyen Le
Photos: Jerry Nguyen
Tags:
TIN LIÊN QUAN
Admission for international Undergraduate programs is open until September 20, 2021
[Idea 2 Business] A UEF faculty member and his team win a scholarship for a course in entrepreneurship
Interview- Session 6: Tips for winning the ERAMUS+ -Students exchange scholarships
Choosing the right international program during the 5K period with “Step Up Your Future” on August 12
Reinforcing self-education in Language students with the Inter-Faculty-Institute Scientific Webinar
UEF exchanges and cooperates with EHLE Institute
The picture of countries in the Anglosphere through 2nd Webinar
UEFers enrich their psychological knowledge with Professor at John Carroll University
UEF enrolls students for Keuka College bachelor's programs
Impressive facts about Keuka College - UEF's international bachelor program partner

The UK Bachelor of International Hospitality and Tourism...

[Idea 2 Business] A UEF faculty member and his team win a... 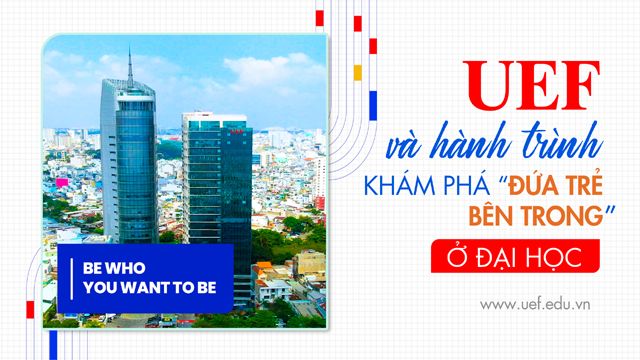